From her real name Salvia Hispanica, chia seed is a plant not yet well known from the general public, she produces several varieties of seeds that are increasingly known in the chia seed market. They are available in black, white and grey. The chia seed is becoming more and more important in the industrial sector. Its properties as well as its rich composition in omega 3 have contributed to its growth on the market. Indeed, the number of producers who grow and sell this plant is increasing. According to the journal Organic Wellness & news, chia seeds will represent a market of about 1 billion dollars in 2020. With an estimated annual growth rate of 5%, we can take a closer look at this particular seed.

Originally from Mexico, they are now present in the international arena. Their germination lasts about six months, they can be planted all year round depending on the country. In Mexico, more precisely in Guadalajara, the season is currently starting in June, at the latest in July. Currently, producers are planting seeds in the fields. The season will end in November, maybe in December, then it will be the harvest. For example, in Bolivia, the season begins in January and ends in June. Bolivia is located in the southern hemisphere of the planet so the seasons are not the same as in the northern hemisphere where summer begins in June. In Bolivia, summer begins in November and continues until March. The market is not static, it does not depend on a single actor, the seasons, the producers are different, so there are several possibilities. This represents an opportunity for the industry but also for distributors.

The chia seed has become the companion of many consumers in European countries, it is widely used in the food industry. It can be introduced in energy drinks, smoothies, cereals, salads and even cosmetics. According to the future market Insight (FMI), demand is the strongest in the food and beverage sector in the chia seed market. It is expected to reach 76,074.3 MT by the end of 2027.

Other trends for chia seeds have made their appearances. Superchips, super cereals, super bars, super desserts, super infusions, all these products have been formulated from chia seed. Indeed, raw chia seeds are not longer the only possibility of resale. Seeds distributors now have several alternatives. Substitutes are selling very well in Western countries, generating an attractive profit.

In the food sector, chia seeds are in great demand not only in industry but also in large specialised shops. Parapharmacies show a strong interest for these seeds because a large part of their customers consume chia-based food supplements for sports sessions, for concentration without forgetting infusions which are also chia-based. Thetrefore, industries need seeds to process them (chia oil, capsules…) and sell them in other forms, which represents an opportunity not to be missed for producers and suppliers. This can be illustrated by the company Forté Pharma Laboratoire, which is specialized in the formulation of pharmaceutical products but is also renowned for their quality food supplements. Recently this company has extracted chia oil to put it in capsule form and sell it. 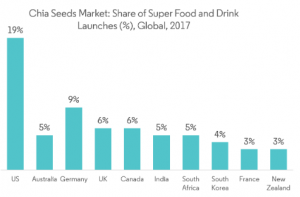 Chia, contrary to what we might think, is not only present in the food industry, but it is also entering a very promising sector that has enormous potential: the cosmetics market. According to statistics on the statista website, the sector is growing at a rate of 5% per year. The cosmetics market has broken its record in recent years, generating profits of €14.5 billion in 2018. In addition, France is the main market leader. Many laboratories now formulate their beauty products with chia seed, which, it should be remembered, is a seed rich in nutrients and therapeutic properties.

The suppliers of the market

The main suppliers in the market are in high demand all over the world: the figures for imports and exports prove it. These figures are very significant, particularly for Latin America, the main market player. According to the CBI, there is an export volume of 18,000 tonnes of chia seeds in Europe, which is equivalent to 41.7 million euros in 2017 compared to 12.3 million euros in 2013. Germany is the largest importer of chia seeds in Europe, followed by the Netherlands, Spain and the United Kingdom. These countries represent interesting potential customers for suppliers. 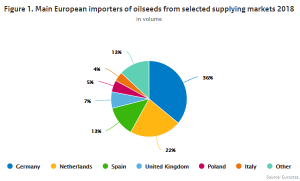 As reported by the Center for the Promotion of Imports from Developing Countries, CBI, Paraguay has 30% of the market followed by Bolivia, 23%, Peru has 17%, Argentina has 20% and Mexico 7%. These countries are the main suppliers supplying Europe. In addition, Europe is a new player that also produces chia seeds, notably in Germany, the Netherlands and Spain.

The chia market is constantly improving, today’s leaders will be tomorrow’s followers. Some producing countries such as Bolivia are facing some difficulties such as climate change affecting seed germination. This is why we are seeing the emergence of new market players such as Canada, which is currently gaining market shares.

In Europe, this increased growth is defined by strong demand: Germany is the leading consumer of chia seeds internationally.

The evolution of prices on the market

Chia seeds are a good long-term investment: market prices are currently falling, which represents a considerable opportunity for traders who will then be able to receive an attractive return on their investment.

Here are the current market prices for chia seeds:

In conclusion, the chia seed market is growing really fast, it is an accessible and profitable sector due to the high demand. In addition, superfood represents an important opportunity for the import-export of chia seeds on an international scale.

About the Author: loic123